Photos & Story by Scott A. Smith

Proud, card-carrying members of the Kiss Army showed up for “duty” Feb. 22 at the Tulsa Hard Rock Hotel & Casino, and their musical heroes thanked the loyal fans with a perfectly paced, 95-minute concert set.

Photo by Scott A. Smith

The set list no doubt was crafted mainly to thrill the casual fans, but the inclusion of rarer tracks like “Flaming Youth” from Kiss’ 1976 LP, “Destroyer,” and the title cut from Kiss’ 1998 album, “Psycho Circus,” acted as an uptempo, wonderful change of pace. “Shout It Loud,” “Cold Gin,” “Firehouse” and “Lick It Up” were accounted for by Kiss, as were “Shock Me” and the stomping, brooding “War Machine.” One fan near the back section, oddly, loudly professed his disdain for Kiss’ fine 1982 album, “Creatures of the Night.”

“I don’t want to hear any of that ‘Creatures of the Night’ crap!” the squinty-eyed man barked through the darkness.

“War Machine” and “I Love It Loud” were the only “Creatures”-era tunes Kiss played that night. Had the title track from the “Creatures of the Night” LP been played, too, that one grumpy fan surely would have slipped over the edge, but this writer would have been levitating with giddiness.

Numerous Kiss fans have been critical of Stanley’s vocals, with the not-so-friendly comments dating back to Kiss’ “Alive 35” tour back in 2009. In all honesty, Stanley only struggled a couple of times during the Tulsa gig. A few vocal lines in Kiss’ slightly dark anthem “Detroit Rock City” found Stanley a bit under his peak-voice form.

Outside of those few shaky moments, Stanley’s pipes stood in fighting condition. Kiss’ Starchild sounded fiercely confident on “I Was Made For Loving You,” which came near the end of the set and boasted a more muscular musical frame than the original 1979 studio recording. Like The Who’s Roger Daltrey back on The Who’s 2012-2013 tour, Stanley wasn’t afraid to let his band mates carry some of the lead-vocal chores. Simmons, Singer and Thayer also sounded terrific at their respective microphones, while their musicianship collectively stood near all-time-high status. 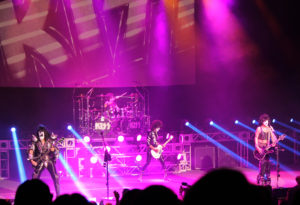 Photo by Scott A. Smith

Seating 2,700 people, the smaller Tulsa Hard Rock served Kiss extremely well. The setting ensured that everyone, even those fans on the very last row up top, not only had an excellent view of all four musicians, but could read the band’s facial expressions. Kiss’ sound in that room may have even been better than the still-good visuals. Singer’s drums sounded more like acoustic drums with fuller, warmer tones, versus the more digital-sounding drum tones heard these days during Kiss’ arena shows. When Singer tapped a tiny cymbal during an impeccable take of “Black Diamond,” one could almost hear the cymbal’s unadulterated sound without any help from the drum mics and P.A.

Also hitting a top-tier plane was Kiss’ take of “Let Me Go, Rock ‘N’ Roll.” Simmons always has been underrated as a bassist, and even though it was Stanley, not Simmons, who wrote and played the original, mesmerizing bass line to Kiss’ “Sure Know Something” back in 1979, Simmons remains a strong player on his Punisher and Axe basses. The fire-breathing, fake blood-spitting Simmons shined via his four-stringed runs on “Let Me Go, Rock ‘N’ Roll,” frequently willing to stray away from the song’s root-note territory.

Few, if any, Kiss fans were surprised that “Rock and Roll All Nite” was the evening’s final song. Even though Kiss has played the song a bazillion times on the stage, the band’s version in Tulsa retained much of the firepower of Kiss’ 1975 version from the group’s volcanic “Alive!” LP. Thick, white streams of confetti rocketed through the air during the song, with several strands of shredded paper landing on the guitar necks of Simmon’s and Thayer’s instruments.