Photos & Story by Scott A. Smith

Each year, a frantic touring schedule of nearly 200 gigs threatens to zap the on-stage energy and artistic drive of Styx.

With the Grammy Award-nominated Styx, there’s no time to lazily slosh through a set. The musicianship and vocal harmonies must be executed from the stage in a way that is as lively and powerful as what’s found on the group’s original studio recordings. And that’s exactly what happened Feb. 26 inside the Tulsa Hard Rock’s Joint. The audience showed up. Styx showed up. And it was one loud, crunchy guitar-filled party to celebrate rock music’s continued popularity.

Following a pre-recorded snippet of The Who’s “Won’t Get Fooled Again,” Styx stormed the stage and let fly a brilliant take of “The Grand Illusion.” Pick slides from Shaw and Young complimented Phillips’ roaming 5-string bass work and Gowan’s impassioned tenor. Warning fans to not let the media’s aesthetic-driven tendencies to put them down in the dumps, “The Grand Illusion“‘s majestic reading immediately signaled that not only was Styx going to be “on” in Tulsa, but the band indeed was going to meet their own prerequisite of giving 150 percent.

“Too Much Time on My Hands,” with its peppy, sci-fi-sounding introduction, stepped up to the plate next, with Sucherman’s firecracker-like snare shots leading the way for the excellent guitar interplay between Shaw and Young. Like Gowan, Shaw’s vocals contained a high quality that pleased fans. 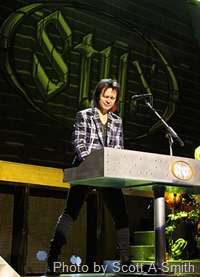 Another curveball in the song-selection department was “Lights,” the lead-off track from Styx’s 1979 “Cornerstone” LP. Shaw handled the lead-vocal spot with perfection, and at song’s end, he discussed the composition.

“That’s a number we haven’t really done in a long while,” he said. “That’s a nice number. It sounds nice. But now we’re done being nice.”

The audience then cheered before Gowan pounded out that still-wonderful Hammond organ chord intro to “Blue Collar Man (Long Nights).” “Come Sail Away,” which was preceded by Gowan’s joyful, abbreviated run-through of Procol Harum’s “A Whiter Shade of Pale,” won as much praise and cellphone light-flickering from the crowd.

After leaving the stage for what seemed like only 60 seconds, the Styx members made a mad dash back to their posts for an adrenaline-filled “Rockin’ the Paradise.” Gowan, donning a tall, dark hat and sparkly jacket, jogged and danced around the rectangular stage, never missing a vocal cue.

The upbeat song from Styx’s concept-rock LP, “Paradise Theatre,” acted as the perfect segue way to set-closer “Renegade.” Reminiscent of Queen, the haunting, a capella intro to “Renegade” was slightly altered in Tulsa, with a grinning JY stroking a guitar chord, one string at a time, at the end of each vocal line in the intro. It was a new twist on a well-cherished classic, proving that Styx is open to incorporating a little bit of change, here and there.